In-Ear explosion.... There are dozens upon dozens of in-ear earphones available these days, (sometimes called "Canal Phones," sometimes called "In Ear Monitors," or IEM's for short). It's probably the largest growing product category in the headphone world. Why?
In-Ears are easily powered by portable players and can be capable of some very good sound quality! With most portable players and music playing smart phones providing cheap earbuds, good in-ears are a natural alternative add-on purchase. Unfortunately, in-ears are often a mis-understood product. We are going to try to offer some explanation of the product, some varying features to consider, and some comparisons of some good, affordable in-ear

With most portable players and music playing smart phones providing cheap earbuds, good in-ears are a natural alternative add-on purchase. Unfortunately, in-ears are often a mis-understood product. We are going to try to offer some explanation of the product, some varying features to consider, and some comparisons of some good, affordable in-ears. 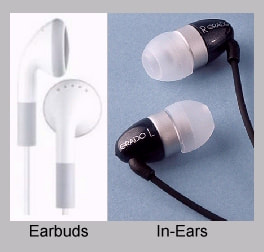 Earbuds vs. In-Ears: Don't confuse these two. Earbuds are fairly small speakers that simply rest in the outer section of your ear. Probably the most famous example would be the white earbuds that have been provided for free with iPods for about a decade now. Most portable mp3 type players for the past decade have also come with cheap earbuds and don't sound very good. Some earbuds can sound OK, (the white iPod buds actually sound pretty decent), but their one-size-fits-all design makes for inconsistent sound from one ear to the next.
In-ears are different. Their transducers, (speakers), are actually smaller than those found in earbuds. But what sets them apart is the way they sit in the ear. They are intended to sit deep inside your ear canal. Most come with various sizes and shapes of eartips to allow the user to experiment to get the best fit. Given the in-ear is of decent quality, once you get a good fit and good seal in the ear, in-ears are capable of some very good sound quality. No, not as spacious of a sound as headphones. But detail can be very good, and some can even provide a full sound in all areas, (highs, mids, and bass).
Some question whether it's safe to have speakers sitting so close to the eardrums? Long term hearing issues may result? Answer... it can be argued that the opposite may be true, (at least with in-ears)? Technically, it's the volume level that can hurt hearing. Too loud for too long is the culprit. Not necessarily the proximity to the ear. So it could be argued that In-Ears used properly can help avoid some hearing issues. Since in-ears inserted properly can block outside sound, a listener doesn't technically need to turn up the volume quite so loud to compensate for the outside environment. Good sound quality can be heard at lower, "safer," volume levels. As long as one is mindful of not turning up the volume too loud, In-Ears can possibly help avoid some hearing issues.
In-Ears vs. Noise Reduction Headphones. Interesting Note.... In-Ears can be so good at blocking outside sounds, that the sales of Noise Reduction headphones has begun to diminish. And btw, a few companies make in-ears that also have built in noise reduction circuitry. Such a combination is redundant. ANR, (active noise reduction), only works on one, droning sound, (like an airplane engine). If you have a good seal with your in-ears, that one droning sound can effectively be blocked, along with all the other random noises ANR circuitry does not work on.

Why are there so many differing opinions on which brands or models are best? In this day and age of individuals offering reviews on various web sites, you'll note some individuals just rave about a product, while others criticize it. The answer to this can be tricky, so we'll just touch on some of the varying factors:
Nothing to compare with.... sounds good! Many reviews you might find at on-line web sites are written by individuals who have little to compare with. Without having experienced other potentially good in-ear's, they may rave about the particular one they have experience with. On the other hand, some individuals may not entirely understand a product, or don't use it correctly, or happen to get a rare defect, and they may knock the very same product.
Varying factors can sway reviews... Not getting a proper fit in the ear can affect the perceived sound quality. Type of music one listens to can affect ones like or dislike of certain sound characteristics of various in-ears, (acoustic, amplified, electronic, etc). One's music source may not be very compatible with the particular in-ear, (or possibly the in-ear emphasizes an area that their particular sound source is not so good at). Some people use equalization settings on their portable players. Such settings may not work so good with some in-ears, (often times good in-ears, or headphones for that matter, will reveal distortions when cheap equalization electronics is utilized). The list can go on.... 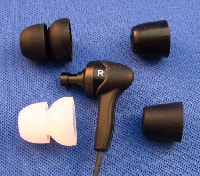 Various Ear Tips - Most in-ears come with various interchangeable eartips. Sizes, shapes, and materials can vary. It can be tricky getting in-ears placed in the ear correctly. Once again, we'll mention how important a good seal in the ear canal is for in-ears. The various eartips, and shape and size of the in-ear affect how well the in-ear fits. Plus we'll mention, the in-ears may or may not stay put once in place? Constantly having to re-insert can be a little inconvenient.
Comfort Issues - Many people have issues with sticking in-ears deep into the ear canal. Especially when trying out in-ears for the first time. Some get used to the feel and become comfortable with them. Others, not so much. We've noted the shape of the in-ear can help or hurt the comfort issue. We also feel some of the smaller in-ears can be quite a bit more comfortable than larger in-ears. Unfortunately everyone's ears are different, so no one in-ear seems to satisfy everyone's issues with comfort. Fortunately with so many different shapes and sizes of in-ears and eartips, you might find an in-ear and fit option that work well for your ears. 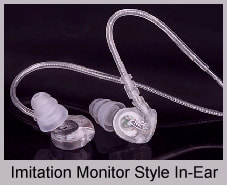 Custom Fitted In-Ears - Perhaps you've noticed most performing musicians these days have In-Ear Monitors that entirely fill the inside of their ears? FYI, they had those IEM's custom made for their ears! If you're very serious about in-ears, some of the in-ear manufacturers are making such custom molded in-ears for anyone who's willing to take some extra steps. How does it work? Basically, you go to an audiologist, they use gooey stuff in your ears that quickly dries to the form of your ear. The mold is sent to the manufacturer, and a custom in-ear is made. Some are built as an all-in-one permanent in-ear. Others are just molds that their standard in-ear just slips into. Price is fairly high, but some have become a bit more affordable. Generally you need to deal directly with the manufacturers for custom in-ears. 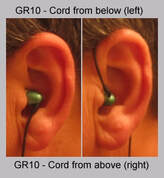 Two ways to fit in ear - Initially in-ears basically were meant to slip into the ear canal pretty much the same way as ear buds. Straight in, cord dangling straight down. Then, some In-Ears were designed to fit in the ears with the cord coming down from atop the ear, cord wrapped up and over the ear from behind. These days, many In-Ears can be used both ways.
Bass or no Bass - Too much... too little ... Years ago, the first inexpensive in-ears we tried had virtually no bass, and fairly tinny sound. Then as some manufacturers experimented with designs, they learned how to get more bass into pretty small in-ears, (some too much bass for our tastes). These days, depending on your tastes, you likely can find an in-ear that with satisfy your need for full sound with some bass. Or if you prefer, lots of bass.
Microphonics - The term is sometimes used to describe the sounds physically produced by mechanical vibrations or knocks on the wires of a headphone or in-ear monitor. Such bumping sounds can be annoying as when you're hearing is isolated by the in-ears, the sounds seem amplified. These days various methods are being used to reduce microphonics from in-ears. Some use cord materials that limit the effect. Others use clips to attach to your clothing to reduce the sound. Another possible solution is using the "cord from above" insertion method as the cord sitting on the top of the ear lessens the microphonic effect. One more note, some in-ears use a combination of any of the above.
Sleeping with In-Ears - I for one often use in-ears when taking naps and sometimes when going to sleep at night. A problem I've found with very many in-ears is they can protrude out from the ear which can make them uncomfortable for side sleeping, (pillow pushes the in-ear deeper into the ear canal). Some in-ears don't protrude out the ear quite as much and work better for side sleepers, (especially the smaller in-ears).
Balance Armature vs. Dynamic Drivers - Most affordable, under $100 in-ears use standard mini drivers, known in the industry as "Dynamic" drivers, (btw, "drivers" is a another name for "speakers"). You may want to note though that there are some more expensive in-ears using what's know as "Balanced Armature" drivers. Such drivers seem to be capable of very detailed sound, though initially they did lack bass. Some manufacturers have used mulitple drivers to allow for a fuller sound. But the trade-off for some was larger size in-ears. These days there are some manufacturers who have managed fuller sound from single drivers using more advanced materials and drivers. But you pay the price for better technology. If spending hundreds of dollars on in-ears doesn't work for you, don't fret as some pretty good, detailed sound is now being heard from some of the more affordable in-ears with dynamic drivers.
In-Ears vs. Headphones - Good in-ears can produce some very clear detail. In fact, it seems detail has almost become easier to produce with in-ears than it is in headphones, (judging from the many muddy sounding affordable headphones I've auditioned)? But when it comes to headphone sound, I feel a standard headphone gives a larger sound and it's hard to compare the sound with an in-ear which produces a sound that is so totally inside your head. I like the detail I hear with good in-ears, but when I'm at home, I'm not giving up the more natural sound I hear from good "Open" headphones like my Grados! 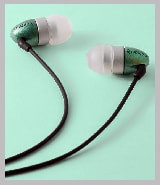 Some In-Ear recommendations - Over the past decade, we've auditioned quite a few cheap in-ears that sounded.... cheap! What prompted this article was a sudden inundation and exposure to various affordable in-ears from several different manufacturers that actually sound quite good. Initially we planned on including some mini-reviews in this article. But given the ever changing world of consumer electronics manufacturers, products come and go quickly.  I personally like the Grado GR10e.  It's kind of spendy, but it sounds very natural, and it's small size fits very nicely in my ear.  Here's a link to purchase from Grado at Amazon:
Grado GR10e at Amazon
Powered by