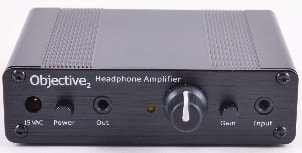 Headphone Amps 101
OK, you've begun researching looking for the best headphones. And perhaps in your search you've read a comment like "This headphone needs a Headphone Amp." You say, "What's a headphone amp?" I've never seen one at the department store where I shop!
Well, headphone amps aren't mass market products. They began primarily as specialty products sold to audiophiles who had high end amplifiers and pre-amps that didn't have headphone jacks. You could also find them in recording studios. But as higher quality headphones became more and more popular, (people discovering you can get audiophile level sound quality at a fraction of the cost of good speakers), the audiophile bug spread to the point that more attention was being paid to the quality of the amplification to power high end headphones. To this day, headphone amps are still not a mass market item. But, there are quite a few available through mail order companies and at some high end audio dealers. Plus, given the popularity of portable music players these days, a whole other category of portable headphone amps has evolved for portable use over the last decade! And more recently, a new category is evolving that incorporates a USB DAC built in, (for use with computers). See below for more detailed explanation of the various types of headphone amps...
Traditional Home/Studio Headphone Amps: Popular with audiophiles, these headphone amps are often fairly simple in looks. A headphone jack and volume control in front. An input, and sometimes a pass through in the back, (usually stereo RCA type jacks, but sometimes mini stereo headphone type jacks). Power source often is an AC adapter, (though some can have battery power). Prices can range from around $150 to over $1000, (remember, this is not mass market stuff so price of entry is high). Some are fairly simple in design. Others can be quite a bit more involved, (and sometimes large and heavy). Some go a step further and can double as a pre-amp, (a popular piece of equipment in the audiophile world). You can even find some "Tube" headphone amps!

Sound quality of most headphone amps is usually good since that's their primary purpose for existence. They can be connected directly to the line-out of CD players, DVD players, Blue-Ray players, Receivers, etc. Whether they sound better than your current headphone amplification depends alot on your current amplification. BTW, most equipment that provides a headphone jack, usually does so on the cheap, (e.g. Stereo or Multi-Channel receivers, portable players, computers, some Tv's, etc.). Some cheap amplification doesn't really sound all that great while some can sound surprisingly good. Just depends?
Towards the end of our days with GoodCans, we found the Objective2 Headphone Amp (see picture above).  It was designed to output a very clean signal. Not color the sound. The designer, NwAvGuy, feels only the headphone should affect the sound, not the electronics, (a very audiophile approach). Many amps might emphasize one frequency over the other, or might be too weak, or might produce hiss.... The o2 amp seems to produce a sound quality that avoids all of those downfalls! It's measured specs have been compared favorably to headphone amps costing multiple times the price of the o2!

We tested the o2 amp and were very pleased with it. We have been reviewing, stocking, and selling headphone amps since the mid-90's, and this is the type of amp we have longed for over the years. Affordable. Quality sound. Fairly small. Powerful enough to drive most any headphone.

A few years back we found a small USA Objective2 manufacturer that we were happy with.  They are now selling thru Amazon.  Here's a link:
Objective2 Headphone Amp at Amazon

Headphone Amps w/ USB DAC (or other DAC's): Computers have become a major source for music listening for many of you these days. Problem is, the move to computers, portable players, and digital music files was a move of convenience. Top notch sound quality rarely is a concern for computer manufacturers. Technically, listening to music from computers is a step backwards from the CD for most. Besides the issue of compressed music files, (hint... less compression technically offers higher quality), the sound cards found in most computers are included on the cheap and sound quality varies a bunch from one computer to the next. And to complicate things further, inside the computer, the sound card is subject to all kinds of electronic interference. Connecting a traditional, audiophile quality headphone amp like those mentioned above to the 3.5mm headphone/line-out jack on a computer in most cases doesn't do justice to the intent of the headphone amp. Garbage in, garbage out.

Enter the USB DAC. A USB DAC, (Digital to Analog Converter), basically allows you to bypass the sound card in your computer. Not only is the quality of most USB DAC's better than the sound cards found in most computers, but taking the sound card out of the computer, gets it away from the all that electronic interference. As mentioned, there are still some issues with how much your music files are compressed, but that's a whole other subject we're not going to tackle in this article. Suffice it to say, if you are looking to improve the sound quality of your computer headphone listening, connecting a headphone amp to a USB DAC, is a better idea than just connecting straight to the output of the internal sound card. And, in a fairly recent turn of events, some headphone amp manufacturers are now including the USB DAC inside the headphone amp!

Years ago we discovered Fiio, a small company making some very affordable and very good headphone related products.  We've owned multiple products from Fiio and have been very happy with them.  Here's a link to a small Headphone Amp/USB DAC that's quite popular:
FiiO E10K Amp/DAC at Amazon
Powered by